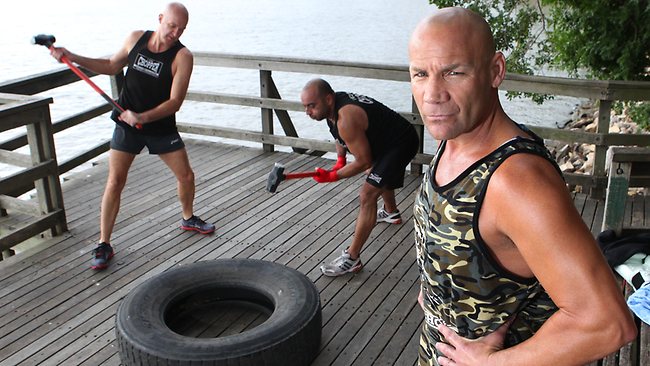 I recently had a article published about me and my DVD, Fighting Fit at 50 in Saturday’s paper. You can view the original here or read it below:

Former policeman Mark Burgess has fought criminals, fought doughnuts and now, having reinvented himself as a fitness guru, wants to fight the state’s rising obesity epidemic among over-50s.

Known as “Chopper”, Burgess – also a former boxing champion – is now encouraging others in their 50s to fight back against poor health.

“Age is just an attitude,” Burgess said. “Just because you’re a certain age doesn’t mean you can’t do anything. I made my documentary, Fighting Fit at 50, to let people know that it’s never too late to turn your life around and get into shape.”

According to the latest figures from the Bureau of Statistics, the rate of obesity in Australians steadily increases with age – 60 per cent of males and 45 per cent of females are deemed to be overweight at 45 years of age.

For people between 65 and 75, the rate of being overweight or obese increases to 79 per cent of males and 71 per cent of females.

Appalled and motivated by these statistics, Burgess said it was important people in their 40s and 50s got up and got moving. And that they don’t give up on exercise because they think they are too old.

“People should not be limited by their age in a workout,” Burgess said.

“There is no reason why they can’t do the same exercises.”

Burgess said it was about limiting intensity, and increasing the rest recovery period between workouts for older people.

“You do have to be smarter, and you have got to be safer,” he said.

He recommended concentrating primarily on diet than on intensive workouts, citing a 60:30:10 ratio for diet, exercise and incidental movement.

“If you’re not putting the fat in, there’s not a greater emphasis on having exercise,” Burgess said.

“Labels on food are purposefully confusing, but you’ve got to learn to read the back of everything.”

By increasing the variety of exercises in his classes, Burgess said clients avoided the burnout of boredom that came with running on a treadmill for 30 minutes.

But the biggest problem Burgess faces from clients is excuses.

“I hear them all day and every day,” he said. “But excuses don’t get results.”

Burgess said the economic downturn had made people stop prioritising their health.

“You can’t enjoy your wealth without your health,” he said.